Young Vecino donor inspires others to give 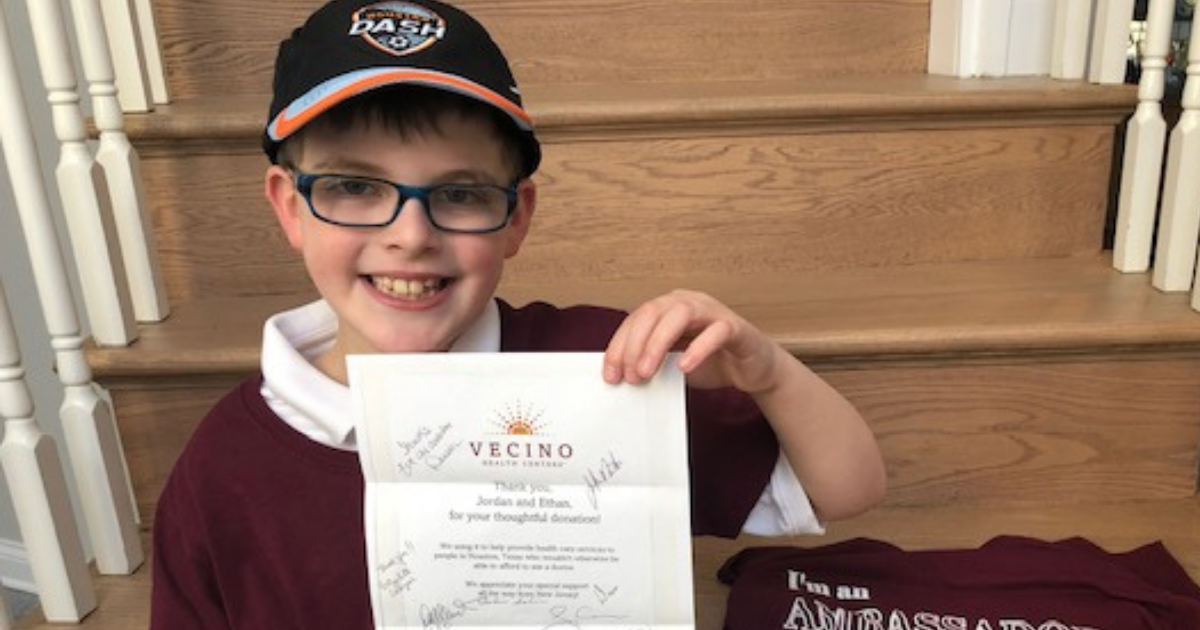 Why did an 8-year-old from New Jersey decide to donate his pocket money to a community health center in Houston?

The answer is found in the unlikely bond between a young boy named Jordan and his friend Dr. Susan Miller. Theirs is a story that teaches us all the importance of role models and the power we have to inspire action through our words and deeds.

A boy who wants to change the world

One weekend in February, 8-year-old Jordan watched a YouTube video about the devastation caused by Houston’s unprecedented winter storm. It might not be easy to connect a YouTube video about a storm to a donation at Vecino Health Centers. But for Jordan, the connection came surprisingly easily.

“Since he was little, Jordan has always wanted to help,” says his mother, Stacy. “He’s the type of person who, when he sees someone upset, he wants to help them. He’s been that way for as long as I can remember.”

Jordan knew Houston had seen more than its fair share of disasters over the past few years. His heart went out to the community and he knew immediately he wanted to help however he could.

Everyone should be able to get taken care of by doctors

The idea of giving back isn’t new to Jordan. His parents have always told their two boys that they have a responsibility to help others. He witnesses these values daily in his mother’s work as the founder of a nonprofit. And he learns them at his Jewish day school, where his teacher reinforces the importance of tenets like charity (tzedakah), good deeds (mitzvot), and healing the world (tikkun olam).

Another place he witnesses these values is through the work of Dr. Susan Miller, a longtime family friend. Dr. Miller is a family physician at Houston Methodist Hospital and also a board member at Vecino Health Centers. Jordan finds in her a kindred spirit.

“I can’t think of a better role model for him than [Dr. Miller],” says Stacy. “When everybody else is fleeing Houston because there’s a flood or there’s a storm, she’s going in. And that is Jordan. He is that person too.”

When Jordan asked his mother how he could help in Houston, she reached out to Dr. Miller to learn more about the needs of the community.

Inspiring others with his story

During Purim, a Jewish holiday at the end of February, Jordan practices tzedakah, the act of putting money aside for charity. He decided to give the money he saved to Vecino Health Centers.

But he didn’t stop there.

Jordan knew that to do even more good, he should share his story to inspire others. So he told his third grade classmates about Dr. Miller and her work with Vecino. The class had just finished collecting money in a tzedakah box. After hearing from Jordan, they elected to give half of it to Vecino.

His older brother, Ethan, was also inspired to contribute.

There is another concept in Judaism, ledor vador, that means “from generation to generation.” As Stacy puts it, “It is our responsibility to pay it forward … to empower the next generation and amplify their voices so they can carry on that torch.”

In many ways, this is an equally important part of Jordan’s story, one that goes far beyond his recent donation.

Stacy points out that Jordan trusts and loves Dr. Miller. He knows if she puts her energy toward helping the patients at Vecino Health Centers, then it is a worthwhile cause. Through his relationship with Dr. Miller, he made a personal connection to Vecino. He didn’t just ask his parents to click a button and donate money. He got involved, and he became an active agent of social change.

“I tell him he has a special light in his heart that shines out energy. He’s already doing good with it, but I know he’s only going to do more good.” At 8 years old, he’s just getting started.

Join Jordan in giving to Vecino

If you, too, are inspired by Jordan’s story, give today to Vecino Health Centers. You can include a message to Jordan in the “Gift message” field. We’ll be sure that he gets it.